Five + Things I Learned And Used From Dear Myrtle.com and the Community in 2013 (So Far)

It all started during Roots Tech this year.  Caught all of Dear Myrtle's YouTube video-casts.  Since then, there have been MANY really informative and useful G+HOA's, occasionally live but most often from the archives on YouTube.  It is clear that each G+HOA involves a great deal of planning and preparation.  It occurred to me that I should review what I learned as this year closes, and when I did, the sum of it all was remarkable.  All of this has been useful and it has rewarded me with confident and productive genealogy.
AND, Other People Value Inferential Genealogy as I do!  I have great appreciation of the generosity of collaborators who share their facts, knowledge and passion.

Thanks DearMyrtle, Cousin Russ  and the entire community!  I look forward to every G+HOA and watch each episode on YouTube.

Posted by Long since dispersed at 3:24 PM No comments:

Early in 2013, surfing for topical genealogy sites, I encountered Dear Myrtle reporting from Roots Tech 2013.  For her 2013 Share A Memory Event, a Spring 2013 "interview" with my maternal aunt Katy provided a memory of my grandfather Frank T.Ryder and the way some homes used to be built.

My grandfather was an executive of the Cudahy Packing Company in Post-World War II Omaha, and things were booming at the stockyards, with the Stockyards Exchange Building in the center here.  Today, all the packing houses are gone and the area is a community college and large industrial park. 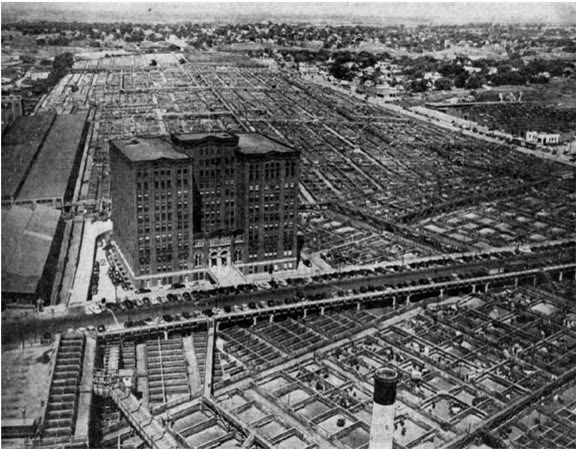 Frank's title when he retired was Chief Master Mechanic, probably a combination of chief electrician and facilities manager.  Frank had moved his family back and forth between Sioux City, Iowa and Omaha, Nebraska several times and the house I remember is one at 1006 Mercer Blvd. which was a large house not needed as his oldest son and daughters began to marry and start their own homes.  About 1948 give or take a year or two, he decided to have a house built in the newer western part of Omaha.

During my "interview" with Aunt Katy, I was reminded that he had the house built from a "kit".  Buying homes from kits apparently had a very long history in the U.S.  My Google search listed examples as far back as the 1880's.  Researching the sources for his "kit", I found many possibilities. There are no family records of the kit's seller and this company brochure offered drawings that seemed familiar but probably not specific: 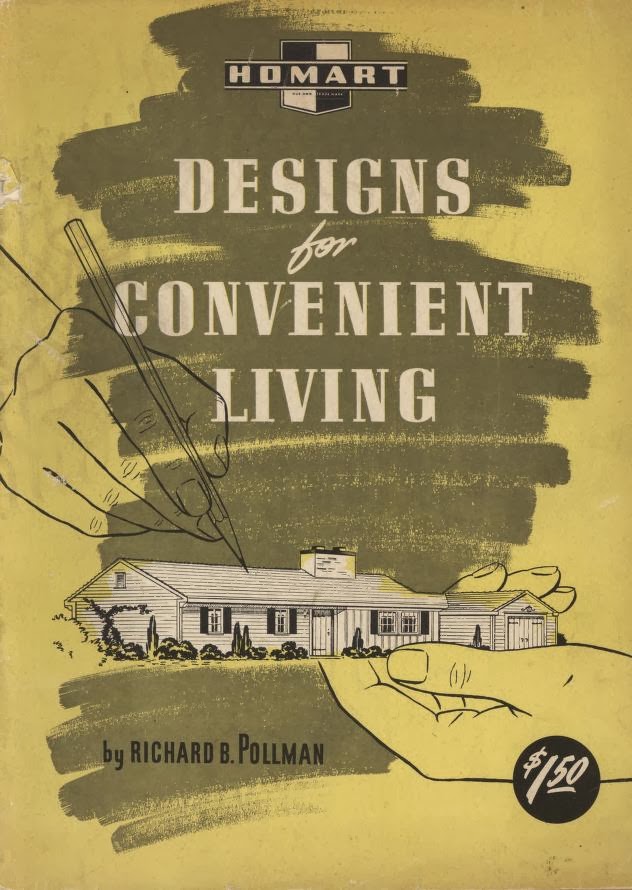 I remember the construction, peering down a ladder to the basement during visits, of course with the cautions to be careful and get away from there ringing behind me.  His "kit" home became this rose-covered ranch with green and white striped awnings but the photo was taken before color photography (at least in our family). Those are my pig tails and bangs in the middle with my mother Mary and sisters Laura and Peggy in 1953. 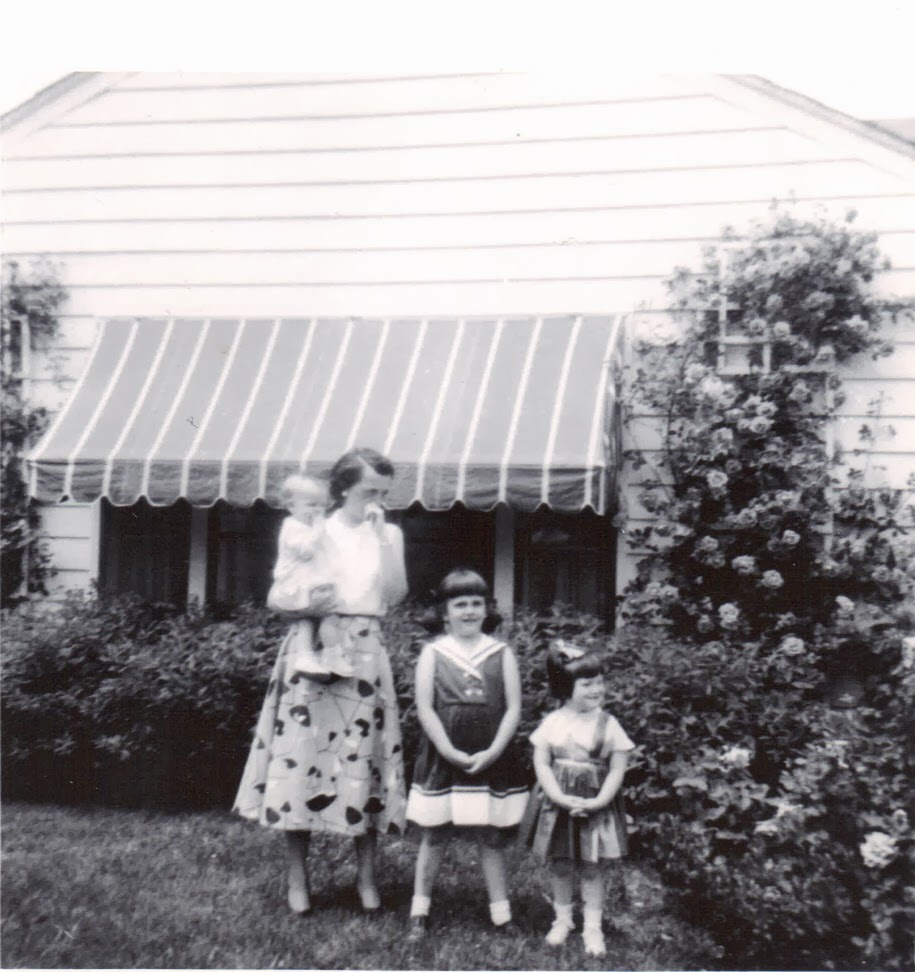 The house was birthday central because the family size was expanding, as well, and this is Frank with two grandchildren at a  birthday party in the walkout basement. More research will be needed to identify the children including those visible in the "enhanced" image in the mirror but it appears that my cousin wanted a caramel apple instead of the abandoned tootsie roll in the foreground. 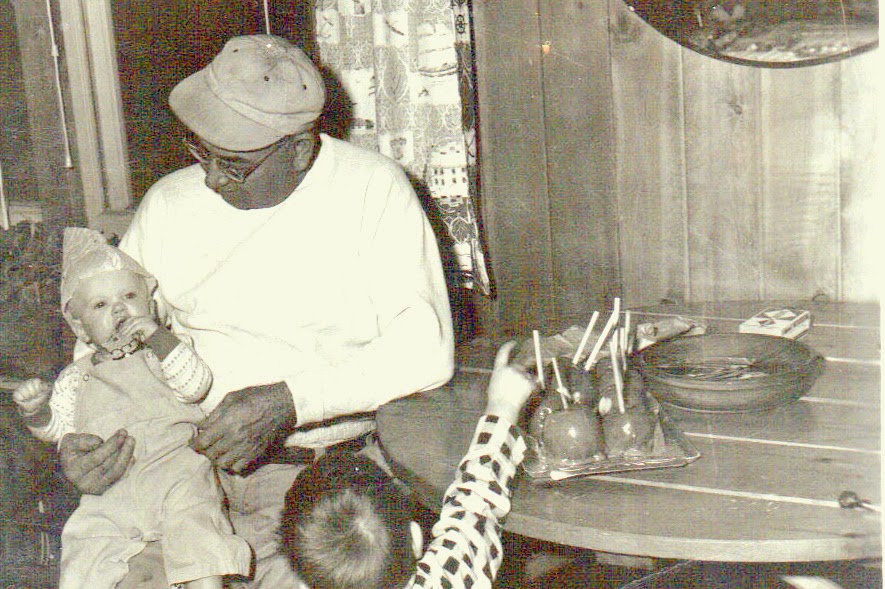 There were definitely tract housing developments being built at the time, and one of Frank's sons-in-law was one of them.  But, Frank liked to be busy himself, and managing this project was a great pleasure to him. He and my grandmother Ruth enjoyed living there until his death in 1957.

Posted by Long since dispersed at 7:08 PM No comments: