It Was Dangerous For Gearens In Early Sioux City!

Long time since a post on Long Since Dispersed!  This story was largely based on clippings found in Newspapers.com combined with photos from several sources.  Although I originally began assembling it on St. Patrick’s Day 2020, the Corona Virus or Covid-19 pandemic intervened and I have been distracted!
The family subjects of Facebook, Instagram and Twitter of times past was found in news and social articles of local newspapers.  Recently, the previously digitally unavailable Sioux City Journal became available on Newspapers.com, a subsidiary of Ancestry.com.  Patrick Gearen, James Gearen and his sister Mayme Gearen (she used Guerin most of her life and her father may have changed the spelling from his birth in Ireland AND her name is variously Mary, Marie or Mamie) appeared in several very interesting pieces.
Unfortunately, there is no picture which has turned up so far of Patrick's daughter Mayme, described in the following story.   Mayme was born in Illinois in 1864 (date on the death certificate or 1862 as stated in this story) and died of a heart attack in 1934 in a Fort Dodge, Iowa, hospital.  She had for decades been the housekeeper for a Catholic priest in Iowa, Rev. James L. Fitzpatrick, identified in several Sioux City Journal articles as a "cousin" or "uncle".  I have not been able through research to make the family connection but he was very close to the Gearen family and officiated at the funeral of Patrick and his son James in January, 1923.   Rev. Fitzpatrick was the "informant" on her death certificate.
Mayme and her father Patrick were injured in a horse and buggy accident in Sioux City in July 1897.  The Sioux City Journal reported on the accident in the following story. 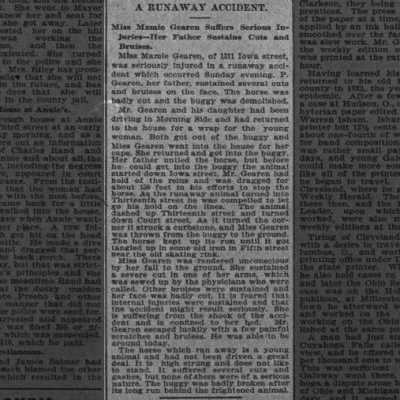 The clipping above is difficult to read so here is a transcription:

Miss Mamie Gearen of 1231 Iowa street, was seriously injured in a runaway accident which occurred Sunday evening.  P. Gearen, her father, sustained several cuts and bruises on the face.  The horse was badly cut and the buggy was demolished.

Mr. Gearen and his daughter had been driving in Morning Side (Park?) and had returned to the house for a wrap for the young woman.  Both got out of the buggy and Miss Gearen went into the house for her wrap.  She returned and got into the buggy .  Her father untied the horse, but before he could get into the buggy the animal started down Iowa street.  Mr. Gearen had hold of the reins and was dragged for about 130 feet in his efforts to stop the horse.  As the runaway animal turned into Thirteenth street he was compelled to let go his hold on the lines.  The animal dashed up Thirteenth street and turned down Court street.  As it turned the corner it struck a curb (unreadable) and Miss Gearen was thrown from the buggy to the ground.  The horse kept up its run until it got tangled up in some old old iron on Fifth Street near the old skating rink.

Miss Gearen was rendered unconscious by her fall to the ground.  She sustained a severe cut in one of her arms, which was sewed up by physicians who were called.  Other bruises were sustained and her face was badly cut.  It is feared that internal injuries were sustained and that the accident might result seriously.  She is suffering from the shock of the accident and is confined to her bed.  Mr. Gearen escaped injury with a few painful scratches and bruises.  He was able to be around today.

The horse which ran away was a young animal and had not been driven a great deal.  It is high strung and does not like to stand.  It suffered several cuts and bruises but none of them were of a serious nature.  The buggy was badly broken after the long run behind the frightened animal.

Mayme's obituary was in the Sioux City Journal in 1935. 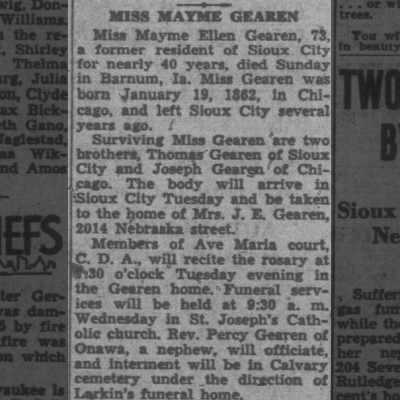 There are pictures of Patrick and James.  This family portrait was in the Sioux City Journal on June 3, 1906.  It was accessed through Newspapers.com on July 10, 2019.  Patrick is on the right and James is top center.  James' son William E. Gearen is at left and the clipping identified the infant as Edward T. Gearen who was born that year.

The next family portrait is Patrick Gearen on the right.  His son James Edward is at left. The younger man in the middle is John Florence Gearen, called Forry or Fleury, Ruth's oldest brother.  The boy in the portrait is Phillip J. Gearen.   The exact date, location and photographer are not known but the original is in the collection of Jim Gearen of Chicago.  It is possible the photo was taken around 1915.
In August, 1912, according to the following articles articles, Patrick Gearen was a victim in a dangerous automobile accident.
The Sioux City Journal provided a full description of the accident and a transcription follows:

Two persons were injured yesterday at Fifth and Pierce streets when the automobile of Louis Wagner, a Beresford, S.D., merchant, turned sharply at the First National bank corner, Those hurt were:

Wagner was arrested on the charge of reckless driving and was placed under a $500 bond to appeal this morning in the police court.  His bond was signed by Otto Longseth, a Sioux City druggist.

Mrs. Mathieson was struck first.  She had seen the car approaching, but thought it was so far away that she was in no danger.  She was knocked to the pavement by the front of the machine as it swung into Fifth street from upper Pierce street.

Engrossed in this accident, Mr. Wagner did not notice Mr. Gearen in front of the car and the next instant Gearen, too, had been knocked down.  Then Wagner stopped the car.

Mr. Gearen was taken into a doctor’s office in the Iowa building and later was removed to his home.  He was bruised about the head and shoulders, and internal injuries are possible.

Mrs. Mathieson arose alone and was assisted to the basement rooms of the Davis Typewriter company.  She was bruised on the left side.  After an hour she was taken to her home in Wagner’s car.  It is not thought her injuries are serious.

There were no follow-up stories to describe Patrick's injuries or the outcome of the charges against Mr. Wagner.  The injuries may have been less serious than first thought because he did not die until 1923.
Patrick's son James was the first to die.  This clipping is from the Sioux City Journal, accessed through Newspapers.com on October 20, 2019. 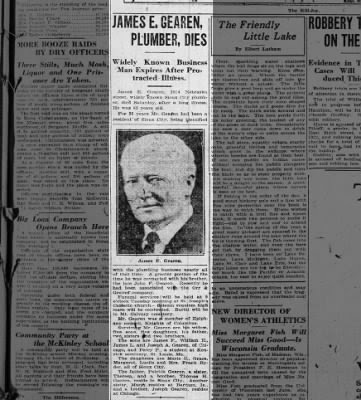 This is the transcription of the very hard to read clipping.
James E. Gearen, Plumber, Dies
Widely Known Businessman Expires After Protracted  Illness
James  E. Gearen, 2014 Nebraska  Street, widely known Sioux City plumber, died Saturday, after a long illness.  He was 63 years old.
For 36 years, Mr. Gearen had been a resident of Sioux City, being identified with the plumbing business nearly all of that time.  A great portion of the time he was connected with his brother, the late John F.  Gearen.  Recently, he had been associated with the Orr & Graves company.
Funeral services will be held at 9 o’clock Tuesday morning at St. Joseph’s Catholic Church.  Solemn requiem high mass will be celebrated.  Burial will be in Mt. Calvary cemetery. Mr. Gearen was a member of Epiphany Council, Knights of Columbus.
Surviving Mr, Gearen are his widow, five sons, five daughters, his father, two sisters and two brothers.
The sons are James F., William E., James L. and Joseph A. Gearen of Chicago, and Percy P. a student at Kendrick seminary in St. Louis, Mo.
The daughters are Marie C., Grace, Margaret, Lucille and Mrs. Frank Ryder, all of Sioux City.

The next clipping describes very simply  one of the first family history stories I ever heard.  The headline is not exactly correct, but it conveys the unfortunate and very sad coincidence of the deaths of Patrick and James. 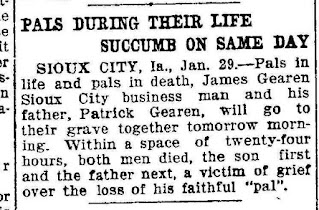 Nebraska State Journal
The full obituary for Patrick was in the Sioux City Journal, January 29, 1923. 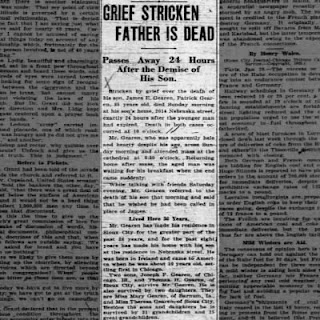 Here is the transcription:

Passes Away 24 Hours After the Demise of His Son

Stricken by grief over the death of his son, James E. Gearen, Patrick Gearen, 85 years old, died Sunday morning at his son’s home, 2014 Nebraska street, exactly 24 hours after the younger man had expired.  Death in both cases occurred at 10 o’clock.

Mr. Gearen who was apparently hale and hearty despite his age, arose Sunday morning and attended mass at the cathedral at 8:30 o’clock.  Returning home after mass, the aged man was waiting for his breakfast when the end came suddenly.

While talking with friends Saturday evening, Mr. Gearen referred to the death of his son that morning and said that he wished he had been called in place of James.

Mr. Gearen has made his residence in Sioux City for the greater part of the past 36 years, and for the past eight years has made his home with his son at the residence in Nebraska street.  He was born in Ireland and came to America when he was about 10 years old, settling first in Chicago.

Double funeral services will be held at 9 o’clock Tuesday morning, at St. Joseph’s church.  Rev.A. E. Zimmerman celebrating the solemn requiem high mass.  He will be assisted in the sanctuary by R. J.L. Cooper of St. Michael’s church in Leeds, and Rev. J. Walsh.  Interment will be in Mt. Calvary cemetery.

The above article mentions the other two sons of Patrick Gearen (his son John F. Gearen, who headed a  plumbing business) had died some time before.  I believe Tom Gearen was also a plumber in that business and Joseph Gearen of Chicago was a professional musician!).

And a final article from Wednesday, January 31, 1923, provided the details of their funeral.

The full clipping is not shown here because of the arrangement of the columns but here is a transcription:
Sioux City Journal,(Sioux City, Iowa) 31 Jan 1923, Wed. Page 8

FATHER AND SON ARE LAID TO REST

Double Ceremony Is Held at St. Joseph’s Church-Burial in Mausoleum

Side by side in the mausoleum at Mt. Calvary cemetery the stilled forms of James E. Gearen, son, and Patrick Gearen, father, were laid in their final resting place Tuesday morning.

Within the short space of a few hours the son, a victim of a lingering illness, was joined by the grief stricken father.

Posted by Long since dispersed at 6:50 PM No comments: Links to this post