In celebration of Memorial Day, 2017, honoring the military service of Azariah Rider.

Frank T. Ryder's grandfather Azariah Rider was a veteran of Company F of the 95th Illinois Infantry.  He was buried in Floyd Cemetery in Sioux City, Iowa.  He was a married farmer from McHenry County, Illinois in 1862, so his wife Mary J. Jacobs and his year old son Fred Rider remained at home. 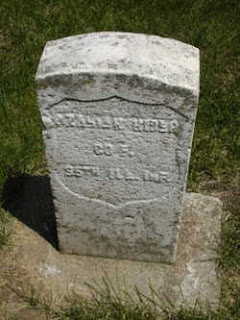 
A complete narrative history of Azariah's unit was written by one of the officers immediately after the war, before the unit was returned home and while still in active service.  The book is available as a free ebook at Google Play Books.  It can be accessed at:  History of the 95th Illinois Infantry


Source:  A History of the Ninety-fifth Regiment, Illinois Infantry Volunteers: From Its Organization in the Fall of 1862, Until Its Final Discharge from the United States Service, in 1865
Wales W. Wood

Company F fought at for General Ulysses Grant at Vicksburg, dozens of other battles and was at Mobile as hostilities ended.  Azariah is included among the discharged privates returned to Springfield, Illinois and then back to McHenry County.  Many others who left with his unit died in battle or of some other illness.

An extensive summary of the unit's military experience is included in Illinois in the Civil War Archive.  The source of the summary is based on a book, originally published in 1908, by Frederick Dyer and it is available at: A Compendium of The War Of the Rebellion by Frederick Dyer
Posted by Long since dispersed at 11:13 PM No comments: Links to this post

These are the birth and death dates for the family of our great-great-grandfather Timothy McCarthy and his daughter, Mary McCarthy, her son Frank Thomas Ryder and his siblings:


Posted by Long since dispersed at 5:45 PM No comments: Links to this post