THE WEDDING STORIES OF RUTH GEAREN AND FRANK RYDER

In addition to the traditional wedding details, the story includes descriptions of the bride and bridesmaid’s gowns which made me go back to a photo of Ruth in a dress which is quite possibly her wedding photo.  See if you agree. 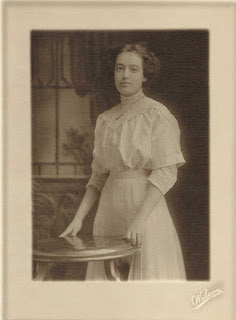 Mrs. And Mrs. James E. Gearen announce the engagement of their daughter, Miss Ruth Harriet Gearen to Frank T. Ryder.  The wedding will be solemnized at St. Joseph’s Catholic church in June.

Miss Ruth Harriet Gearen, daughter of Mr. and Mrs. J. E. Gearen and Frank T. Ryder, son of Mrs. Mary Ryder, will be married this morning at 7:30 o’clock at St. Joseph’s Catholic Church, where an uncle of the bride, Rev J.L. Fitzpatrick, of Barnum, Ia., will officiate and the attendants will be the bride’s sister Miss Marie Gearen, and Charles T. Donohue.  Miss Marie will wear a dress of yellow crepe de chine, with white picture hat, and will carry Ward roses.  The bride’s gown is to be of white pussy willow taffeta, with a veil of white silk net caught with a bouquet of orange blossoms.  She’ll carry a bouquet of ophelia roses and lillies of the valley.  The wedding March will be played by Mrs. Helen Smith, the nuptial music will by Miss Alice O’Connor and Miss Margaret Hacker of Chicago.

Following the service, there will be a a breakfast at the bride’s house, 2014 Nebraska street, for 50 guests.  At noon, the couple will depart on a northern honeymoon, on returning from which they will live at 419 John street.  The out-of-town visitors for the ceremony include Mr. and Mrs. Dave Arends, Mrs. And Mrs. Flurry Gearen and family, Al Gearen, B.J. Gearen, all of Chicago; Miss Marguerite Hartnett, of Hubbard, Neb.

However, the story includes two amazing details which continue the search for her other ancestors!  First, the celebrant was her “uncle” Rev. J.L. Fitzpatrick oF Barnum, Is.    I have not found the connection yet but the search will be assisted by this fact.  Second, Ruth’s mother was (El)Dora Virginia Curtis Gearen.  After finding one census entry showing her family in the 1870 census in Lexington, Rockbridge, Virginia, there were no other records until the mention of Mr. and Mrs. Dave Arends in this story.  Other newspaper stories identify her as Dora’s sister!  I’ll do another brief post about her soon.

Sometimes it takes a long time and many clues!

Email ThisBlogThis!Share to TwitterShare to FacebookShare to Pinterest
Bridge For Ruth Gearen Ryder


Happy Birthday Grandma!  Ruth was born this day in 1882, very memorable every year, of course,  because it is the Feast of the Assumption.

Recently, I accessed a very sizable collection of newspapers through Newspapers.com for the entire Sioux City Gearen Family and some related Chicagoans, as well. Among them, I found the following entries, now transcribed to be easily read.  Clearly, the Social Calendar was a printed equivalent of many social media platforms of today!

I had no idea that Ruth, her sisters and friends ever played bridge so this was a charming discovery. At least for a time, it was clearly a popular social pastime.

Of course, you probably all remember that my mother Mary and her sisters Franny, Katy and Patty and their husbands and friends played often over many years, together and in clubs with friends.    Perhaps the attraction of the game had waned for Bernie and Tommy’s friends?

Miss Marie Gearen entertained members of her bridge club at he home Saturday evening as a courtesy to her sister, Mrs Frank T. Ryder of Omaha.  After several rubbers a dainty luncheon was enjoyed.

Mrs. C. J.  Brennan will be hostess of a company of friends at her home this evening complimenting Mrs Frank T. Ryder of Omaha.  Bridge which will form the pastime will be terminated by the serving of a luncheon.  Mrs. Walter Hammerstrom presided over a similar occasion for Mrs. Ryder on Monday evening.

Mrs. Frank T. Ryder of Omaha, who is visiting relatives in the city, is being entertained at a series of informal social courtesies.  Monday, Mrs. B.J. Noonan was her hostess at luncheon and this evening Miss Annamae Nolan will compliment her at bridge.  Mrs. H.J. Meyer will entertain at bridge for Mrs. Ryder and Mrs. J.A. Walsh will preside over dinner and bridge in her honor Friday evening.

Posted by Long since dispersed at 5:00 PM No comments: Links to this post

On March 18, 2019, we drove up to Bath County from Asheville, NC on Interstate 64, entering Highway 39 at Staunton, Virginia.  It was a quick trip once there because it takes quite a while to get there and the winding roads made the prospect of night driving on them dangerous.  In addition, we were followed by a local in a late model grey pickup who approached me and told me he followed us to make sure we weren’t “breaking into nothin”.  So we two senior citizens were run out of Ryder Run!

Here’s a permalink for this video:  https://www.longsincedispersedgenealogy.com/2019/03/the-trip-to-ryder-run-lands-of-william.html

Posted by Long since dispersed at 10:07 PM No comments: Links to this post

Read more »
Posted by Long since dispersed at 8:03 AM No comments: Links to this post